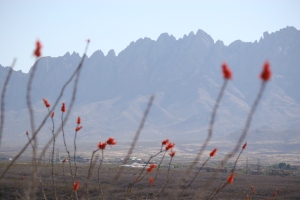 (6 a.m., Sunday morning, March 4) In two hours a couple of local dudes will arrive to help unload some heavy, bulky furniture from the 28-foot trailer in our driveway. This will be day #11 of doing nothing but packing, moving, and unpacking since the last days of February. Moving highlights so far: acres and acres of pink almond blossoms in California’s Central Valley while heading south on Interstate 5 on a gorgeous spring-like day; driving through the open desert in three different states; arriving at our Las Cruces home Thursday afternoon and having our trailer delivered hours later.

We’ve been chipping away at unloading, unpacking, and settling in ever since. At the end of each day we’re apt to sit in low-slung beach chairs on the back patio and knock off a bottle of wine as the sun goes down. Quite a spectacle, too: our house sits on the western slopes of the Organ Mountains, giving us an elevated overview of the city of Las Cruces below and a limitless view of the western skyline in the distance.

So far there’s been no time to explore and discover the area, other than a quick trip to a nearby upscale grocery store for overpriced basics and accepting an invitation to have Mexican food for lunch with our landlord and his wife on Friday.

(4:45 am, Tuesday morning) I took a break from unpacking yesterday to run some errands in town and get a look at what Las Cruces has to offer, other than clean air, beautiful sunsets, and friendly locals. Speaking of friendly locals: there was a knock at the front door Saturday afternoon while we were blasting music and unpacking boxes. One of our neighbors – Gabrielle, from Germany – stood in the doorway with a plate piled high with just-baked oatmeal cookies, welcoming us to the neighborhood and giving us a quick rundown on the names of her family and the families around us. Sweet lady, sweet gesture. Awesome cookies. I digress . . .

The west side of Las Cruces appears to be stuck in the late 50s, early 60s. After gassing up the truck on that side of town (cheapest gas: diesel, $2.72, unleaded, $2.09) it took a bit to find the UPS building where a new bed frame was to be picked up. Lots of corrugated metal buildings in this industrial area, including the UPS building, which was not much more than a big, mostly-empty warehouse set back from the road behind a tired-looking restaurant in need of a paint job and some customers: not a car in the restaurant’s lot. The UPS lot, however, was full of what I assumed were vehicles belonging to the delivery guys: very few cars, but a whole bunch of pickup trucks, most of them modified with lift kits and big tires. While loading the heavy bed frame package in the back of my own modified truck I smelled something wonderful in the air and asked the helpful warehouse guy if there was a bakery nearby. “No,” he said, “that’s the chile roasting factory on the next block.”

The rest of my errands were on the opposite side of town, closer to home, giving me a chance to cruise through the heart of the city, west-to-east, on what was once the town’s main drag. This is when it became clear that the locals have, for some time now, been spending their money in the new modern-era shops and restaurants that have gone up on the eastern side of town in just the last five or eight years. Picture any desert town you can imagine along Route 66, thriving during the 50s and 60s, then comes a new freeway, bypassing the motels, restaurants and shops that these towns depended on for infrastructure revenue. Fifty years go by and parts of these towns that were once charming and cool are now, in the case of Las Cruces, a bit run down and tired-looking . . . You can sense what the town once was and must have meant to a previous generation. The closer I got to the newer part of town the more traffic increased, the more things began to look like every other town in America experiencing sprawl and growth: chain stores and franchised restaurants, with their trademark construction and logos, thrown up quickly on land that, for years, had been nothing but dirt and weeds. . .

Speaking of driving, I’ll back up for a moment to recap the drive out here from the Bay Area, which was pretty awesome for a few reasons: certainly the idyllic weather, which was lovely for the entire 1,200-mile drive that began Tuesday the 27th, and included a snowy landscape in the southern California mountains separating Lancaster and San Bernardino (a nice alternate route, by the way, for you Californians wanting to bypass the whole L.A. area on your way to visit us). My packed truck was towing a fully-loaded ten-by-five trailer, making me ride heavy and solid on eastbound Interstate 10 while cutting through windy parts of the desert. Lisa, in her wee little Hyundai Sonata, got blown around a bit.

Driving separate vehicles meant we could DJ whatever music – or none – we wanted, at any time, along the route. I had a ball with this: packing up my crap in Castro Valley turned up a shopping bag full of mix tapes I’d specifically made in the 70s and 80s for road trips exactly like this. Lucky me to have bought, in 2003, one of the last GMC Sierra 2500 models with a CD player AND a cassette player: a dozen or so tapes I’d forgotten about or hadn’t heard for decades were carefully chosen, put in a shoe box, and placed on the passenger seat  . . . What a thing it was, to drive the same highways through the same desert areas I’d made so many of those tapes for, each tape labeled conspicuously: SUMMER MUSIC, COOL TUNES, BIG MUSIC, THE VACATION TAPE, HOT AND COOL, CROSS-DENVER-JOEL, HIGH ENERGY ROCK. . . Heading for the California/Arizona border I had the music loud and the windows down, re-living a memory from my mid-twenties.

The mood changed when the Arizona desert landscape became vast and downright gorgeous under clear skies. I rolled up the windows and put on a tape of piano and American Indian flute music – Peter Kater and R. Carlos Nakai’s “Natives” album – and quickly got into a whole other zone: a perfect soundtrack for the movie that was my transitioning life.

We’d decided early on to make our drive time as relaxed and enjoyable as possible, so an Airbnb stay in Cathedral City near Palm Springs the first night and Tucson the second night meant we could slow our roll to Las Cruces, enough to arrive here by Thursday afternoon, March 1st. Before cutting out of Tucson early that morning we had a killer breakfast at Robert’s Restaurant: fresh, scratch-made everything, including their blackberry syrup, corned beef hash, and buttermilk pancakes. The bill, with tax, would easily have been over $40.00 in a Bay Area restaurant that treated their food this way. Our bill – with coffee, tea, and tax – was $28.00.

Every day and all day since arriving has been about unpacking and “designing” and decorating 2,100 square feet-worth of space with our respective stuff. I don’t think either of us expected this process to be so enjoyable and stimulating: with very few exceptions our separate furniture, treasures, and belongings are magically syncing up to make each room – each “zone”, as I’ve been referring to them – both comfortable and aesthetically pleasing, including which pieces of framed art to hang where and which little treasured object to place in which little wall niche.

This being the Land of Enchantment, and this house possessing an enchantment all its own due to its unique design by famed southwest builder Eddie Chavez, most all of our unique, quirky, hippie-chic, earthy belongings seem to play quite nicely with each other in the common areas. Two of the four bedrooms will become our respective offices, which, at this writing, neither of us has given much attention to since our organizational energies have been devoted to the common spaces. We started unloading the 28-foot trailer last Friday and as of this morning (Tuesday) a good portion of the house looks like we’ve been here for a month or two. There’s so much ROOM in this place . . . and each room – each zone, each nook and cranny – has just the right chair, lamp, piece of art, and level of comfort to make us slightly giddy with the discovery of how well our respective lives and our respective stuff is coming together, despite the remarkable phenomenon of hell freezing over.

We plan on returning to the Bay Area for a family wedding in late July. By then I’m sure there will have been some furniture and decor upgrades made to the house since we’ve yet to wander and explore the town and our surroundings. Since arriving, the weather has been cool-to-mild, so being indoors most of the day has suited us just fine. We’re well-stocked with food, music and wine . . . our internet and Roku TV is dialed in . . . and every evening brings a peach-colored sunset that shoots right through a pair of French doors at the back of the house and into our kitchen, making everything glow in yellow-ish/orange light.